a couple of weekends ago I was able to measure some trees in Hartwick Pines SP in MI which is something that I've wanted to do for many years but I kept getting thwarted. Other NTS have been more fortunate and I'll recount what I know of their exploits first and hopefully they can make corrections and/or additions. The first NTS measuring trip that I'm aware of was by Bob Leverett and Will Blozan in August of 2000 and they measured a white pine to 6.5' x 157.0' which became the tallest accurately measured tree in Michigan. They also measured a red pine to 6' 5" x 143.6' which I believe was the tallest for any red pine anywhere. Don Bragg visited the park in December of 2006 and he measured:
White Pine 106" (8.8') x 147'
92" (7.7') x 151.5'
Red Pine ca. 125'
Hemlock ca. 95'
Sugar Maple 85-90'
Beech 85-90'
Early last year (or maybe a little earlier), Mark Rouw told me that he had measured even taller pines. I can't remember why he didn't post them but I think he said he was a little unsure of the numbers. In any case we were all set to go measure them in April of 2015 with Dan Morris but in the end neither of them could make it and my trip was a failure due to problems with my equipment. I did, however, get one measurement that I thought confirmed one of Mark's white pines and that was enough to entice me back for a quick visit back this year. Mark said that he measured one white pine to 8' 9" x 161' and another to 8' 11.5" x 162'. He also said that he measured a red pine to 5' 8" x 147'. I found the first white pine because he GPS'd that tree but not the others. I also got around 161' for that white pine but I didn't trust my numbers either. So now it was time to revisit this site. Unfortunately I don't recall when Mark made his measurements but I believe it wasn't that long ago.

So I drove all night after work on Thursday the 12th of May to Hartwick Pines and I slept for three hours in my car 'til 8AM in the parking lot. Then I got to measure some trees! I did a quick shot of a hemlock and got about 95' which was the same as Don, while walking towards the white pine that might be 161' tall. Saw some nice, old-growth red maples with their shaggy bark. Here are a couple pictures.

Soon enough I came to the white pine and I measured it to 8.86' x 162' 2" with my TruPulse 200X. This is now the tallest known tree in Michigan thanks to Mark! Here is a close-up with my wife Ellen from last year in April.

And here is a full shot of the tree with Ellen from April 2015.

I started trying to find tall red pines and the first I measured was 138' 8" and I soon found that 130' red pines were quite common here. I headed down towards the wetland area where Bob and Mark both indicated that most of the tall trees were to be found. I noticed an awful lot of dead trees including two red pines that were both just over 140' but luckily I saw a live red pine that looked taller. It was. I measured it to 5.62' x 151' 10". I believe this is now the tallest known red pine. It may be the same one that Mark measured but I'm not sure because there were other red pines here that had recently died that were nearly as tall. Here is a shot of this tree near the center of the picture. It is partially blocked lower down by a tall but dead red pine.

In this next picture you can see a log on the ground starting at the lower right and if you follow this log towards the center of the picture you'll see a skinny hemlock with dark gray bark. This hemlock is growing just in front of the tall red pine.

Here is an even closer picture showing just how close the hemlock and tall red pine are to one another. It should be easy for future measurers to identify this tree.

In this area I looked for the other tall white pine but I couldn't see any over 160' tall. I did measure a hemlock taller than the 95' tree that Don Bragg had measured though. Not far from the tall red pine stood a hemlock that I measured to 6.01' x 112' 7". This is the tallest accurately measured hemlock in Michigan to my knowledge. For some reason they don't seem to be as large as those farther East. Here is a bad picture of this tree.

This was the end of my accurate measurements for this trip but I wanted to share some pictures from last year when I also visited Red Pine Natural Area in Roscommon County not too far South of Hartwick Pines SP. This area has old growth red pines that are not as tall as in Hartwick Pines but they are larger in girth and in volume and quite beautiful. I posted one picture from this place earlier but here are a few more. Old growth red pines and path.

Red pines with my wife, Ellen and my mom, Gabriele.

Close-up of red pines with white pine in the middle.

Red pines with white pines in the background.

I didn't want to make this post without at least showing some pictures of Michigan's third native pine; jack pine. Here are some young ones from 2015 in the Red Pine Natural Area outside of the old-growth.

This year I noticed some areas marked as old-growth jack pine in Hartwick Pines SP. I took some pictures of one tree in this area that was just under 80' in height. The first shot is a close-up of the bark.

Now a wider shot showing more of the trunk.

And lastly, a picture of the whole tree.

I'm hoping to eventually go back to this region to measure the shorter but larger red pines as well as possibly some jack pines and maybe some other trees too.

If you want a better view of any of the pictures just click on them.

Congratulations!!! Those are some fantastic pines! Wonderful photos, too. Thank you for sharing.
https://flic.kr/s/aHskRDyuEH
http://www.inaturalist.org/people/er1kksen
Top

Excellent work. In NY, the gap between the tallest White and Red pines is close to 50', and could potentially be even larger. Hartwick was one of the first old growth trips I made, back in '09 or '10. I had no measuring equipment then, but the only forest I could compare it to for Red pine was the one in Norway, ME. In reality, Hartwick seems much more impressive.

Do you have a theory about why these pines have grown so well? From what I remember, the ground held plenty of moisture and the trees seemed to grow very closely, but the terrain was pretty flat. What's your opinion? Also, thanks for including some Jack pine, one of my favorite trees.

Erik and Elijah,
thanks for the kudos.

Elijah,
I don't know why the pines have grown so well at this site. It is in perhaps the harshest climate of the lower peninsula with the coldest temperatures in Winter and rather hot Summers (for this latitude in the Great Lakes region) with less precipitation. All of this is due to the relatively great distance from Lake Huron and Lake Michigan. I think you are probably right that the moisture coming from below is the most likely reason that they have fared so well. Hartwick Pines is located right along the Au Sable River which is well known as the best trout stream in the Midwest. The reason for this is that the river is extremely stable due to most of the flow coming from groundwater and this also keeps the water cool all Summer long. At one time this river even had grayling which is unusually far South for this far northern fish. Grayling were extirpated from this region with the intense logging. I imagine the trees are tapping into that groundwater as well. 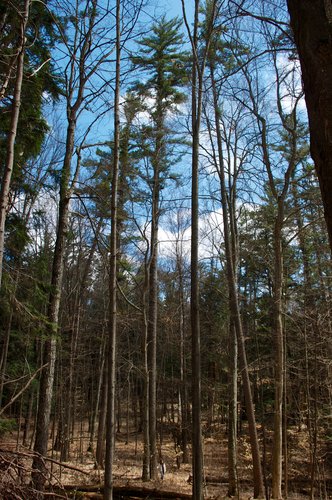 Probably the single best representation of a 160 foot tree I have seen and, man, do we ever not have that here. We were supposed to according to old surveys. It is good to see something like they talked about still exists.

A very impressive MI site, I knew nothing about.

It is hard to believe oaks get that high, too.
We travel the Milky way together, trees and men. - John Muir
Top

Doug,
Not only did you find a new height record but you also surpassed a major benchmark at 150'! The 162' white is no slouch, either.
Brian
Top

Forgot to ask if the ages were known?
We travel the Milky way together, trees and men. - John Muir
Top

Wow! This is fantastic. Chalk one up for white pine!

Also, I think only an ENT would understand getting up to measure trees after only 3 hours sleep. Nice work!

Elijah,
I wonder why red pine does so well in the western lakes relative to white pine but hemlock not so much. The biggest and most consistent difference between New England and Michigan that I've noticed is simply the greater rainfall and more acidic soils in New England. Maybe just the increased precipitation and higher humidity of New England provide for a fungal nightmare for red pines. Also, the soils of the north-central lower peninsula are very sandy and I often see red pines here in MA in heavy soils. Hemlocks love water. Where I grew up in southeastern MI they were not even present. Not even in wetlands like yellow birch. I imagine that the greater precipitation and higher humidity make them very happy here in the East. They probably do best in MI right along the Lakes where they get much more moisture.

Brian,
funny how certain number thresholds become meaningful for us isn't it? But just think, 151' 10" is 46.28m. Now it doesn't seem to mean anything. In the metric system 50m is the magic number and that's 164.04' and no tree in MI even reaches that level! At least not any that we know about.

Lucas,
I don't know how old the trees are. I only know that the forest is old growth but they probably have cored at least some of the trees. I need to try and find that info.

Matt,
when I first arrived at Hartwick Pines just before 5AM I got out of the car and walked around a bit and I was surprised that it was already becoming light outside. I heard a noise behind me that seemed to come from the trees and when I turned around there was a porcupine near the top of an aspen munching away. When I checked again at 8AM he was long gone.
I think most people think we're crazy for some of the things we do to measure trees but I'm always surprised by the number of people who show a real interest. When I next go to MI I'm going to meet up with a young guy still in high school who wants to learn to measure trees and he says he knows of a big tree that he wants to show me...cool!