NTS: Friend Tom Connelly scored a boating permit in the 4-rivers lottery for the Middle Fork of the Salmon River in Central Idaho. Other then Colorado River through the Grand Canyon this is the hardest permit to get. There was less than a 4% success rate for the 10,000 applicants in 2011.
So Susan and I headed to Idaho with seven other boaters for a put-in during the last week of July 2011. Our starting point will be in the Salmon-Challis National Forest at Boundary Creek with an elevation of 5800 feet. We will take-out at Cache Bar on the Main Salmon River 100 miles downstream and at an elevation of 3000. All but a one mile section at the putin is a federally designated Wild River flowing through the Franck Church River of No Return Wilderness.
En-route we stopped at Craters of the Moon National Monument and took in the stark beauty of this surreal landscape. After leaving Craters of the Moon

Click on image to see its original size
Photo by Susan Sharp
we made camp at the Sheep Trail Campground in the Sawtooth National forest about 20 miles east of Stanley, ID at 6500 feet elevation. Two Lodgepole Pines (P. contorta var latifolia) were measured before dark: Girth 3.2’ x 65.9'; and 3.6’ x 65.1’.
Stanley lived up to its icebox reputation as we awoke next morning to a frost and frozen water bottles.
After crossing the divide between main stem of the Salmon River and its Middle Fork we camped at the Boundary Creek Campground where we would rig our boats and get checked in by the ranger, We had two kayaks, two inflatable kayaks(IKS). two rafts, and two catarafts. The campground was on river left at 5,800’ elevation. A short distance upstream was Dagger Falls where we watched some salmonid species trying to attain its birthplace.

Click on image to see its original size
Marble Creek Rapid,aka Chipmunk) Class 3-
Photo by Susan Sharp
This benign looking rapid was anything but and the results were not pretty. We tallied four swimmers, both IKS and one captain each from a Cat and Raft. John Fichctner, as a passenger on a captainless raft, somehow stayed aboard. As we crawled ashore our humiliation was complete as we saw a group of mostly teenagers on a guided trip wave to us as they cleanly ran the correct line.
Measured 3 Ponderosa Pines at: 7.4' x 89.6', 6.5' x 95.0', 10.4' x 84.1' and a Doug-fir at: 5.4' x 104.3'
Many of the camp sites we used had evidence of the original inhabitants occupation. On the benches above the river it was not unusual to see multiple depressions in the ground which are commonly called pit houses. One is pictured below. Click on image to see its original size
Susan Sharp, 12.1' x 121.1'
Photo by Turner Sharp
Day 4 & 5. The camp was at the confluence of Camas Creek at mile 60.3 on river right. Eleavation 3,800’.We have a layover day at this very nice camp with good shade , nice smelling Ponderosa Pines and good hiking . I hiked up Camas Creek about 2 miles checking out the vegetation along the creek.I measured two Water Birches (B.occidentalis) at: 2.1’ x 28.4', 1.6’ x 33.1': Black Hawthorne (Crateagus douglasii) at 1.7' x 32.3'. Other species noted along the creek were: Saskatoon Serviceberry (Amelanchier alnifolia), Rocky Mountain Maple (Acer glabrum), Blue Elderberry( Sambucus nigra spp cerulea). Also measured along the creek was Ponderosa Pine at 10.6' x 127.7', Doug-fir at 14.1' x 139.7'. It was while measuring this last tree that a bear came skedadling down the mountain after some hikers from our group above me spooked it. They never saw it and the bear never saw me even though it came within 75'
Pictured below is the large Pondersosa Pine that provided our campsite with much appreciated shade on our layover day.

Click on image to see its original size
12.4' x 109.0', Susan Sharp
Photo by Turner Sharp
The two shrubs on either side of the tree are Water Birch Clumps were typical of others observed . These are not the two I measured.
This trip was unique in that we had quite a collection of very competent boat women. Here the are posing near the mouth of Camas Creek.

Click on image to see its original size
Pictured are Bridget Tincher, Kathleen Simpson, Marilyn Polan, Susan Sharp
Photo by Turner Sharp
The following picture gives an idea of scale. Pointing almost due west to the confluence of the Middle Fork and Camas Creek at an elevation of 3800 feet the elevation to the first knob is 6,700 feet and the far ridge in the far background is 8600 feet. Our wonderful Ponderosa Pine at the campsite is barely visible right of center in the photo.

Click on image to see its original size
Photo by Susan Sharp
I am sure that Camas Creek got its name from the plant (Camassia quamash) whose bulb was edible and was/is an important part of Native American culture.
Day 6: Next overnite stop was Survey Camp on river left at mile 74.4 on river left. Elevation of 3500
Measured 3 Ponderosa Pines at : 9.8' x 100.8', 9.8' x 90.6', 8.7' x 85.1'. These three trees were ax scared from knee to head high - to collect pitch?
Other trees measured were a Rocky Mountain Juniper (Juniperus scopulorum) at : 1.6' x 23.7’ and some Curlleaf Mountain-mahoghany (Cercocarpus ledifolius) at: 1.4' x 18.6', 1.8' x 24.1', 1.8' x 13.9'
Day 7: Our last overnite stop on the river was at Solitude Camp on river left at mile 92.8. Elevation of 3200. Very small camp with no hiking opportunities and only one accessible tree to measure. Doug-fir 11.7' x 103.8' This end of the Canyon is called the Impassable Canyon for a reason. We were only about 6 miles to our takeout at Cache Bar. However once we hit the main Salmon there is one more rapid of concern – Cramer Creek Rapid which was formed after heavy thunderstorms blew out the creek in 2003 Several of our party did not have pristine lines and Bridget had her first ever flip and Mike in his Cat was violently cartwheeled through the rapid and ejected but his passenger, John Fichtner, earned the name of Velcro britches because once again he was still in his seat after the boat landed upright. After righting the raft we derigged at Cache Bar, made a stop at the groover cleaner, and made it to the Scout Mountain Campground in the Caribou National Forest just outside Pocatello where I managed to measure one Doug- fir before dark at
6.2' x 95.3'
Turner Sharp
Top

Very nice report. The report ad images are already embedded in the January issue of the eNTS Magazine. Those lava fields are neat stuff. Within the larger lave flows at Craters of the Moon, for example, are often little isolated pockets of forest that has little interaction with the outside world. They form small pockets of green forest or prairie within the desolate basalt.

Ed
"I love science and it pains me to think that so many are terrified of the subject or feel that choosing science means you cannot also choose compassion, or the arts, or be awe by nature. Science is not meant to cure us of mystery, but to reinvent and revigorate it." by Robert M. Sapolsky
Top

Thank you for sharing about your trip. Like Ed, the lava flows really interest me and I appreciate getting to see a good picture of them. I've mostly just seen Idaho from the highway and the area around Boise and Nampa, so this is really great. Thanks again.

Elijah, NTS
Here are a couple more pictures from Craters of the Moon.
Partially collapsed lava tubes with a couple of hikers

Click on image to see its original size
Life does return

Click on image to see its original size
Limber Pine?

Turner, Wow what an adventure those are some great photographs and the trees are awesome. Photos just don't do justice to a beautiful place like that thanks for sharing it. Larry
Top

1) The lava tube cave appears to be (I am positive it is) the one called "Indian Tunnel" the largest and southernmost of the lava tubes along the Caves Trail.

2) The flower I am guessing to be Syringa sp.

3) Yes that is a Limber Pine. I believe it is a pine along the North Flow Crater called the "Triple Twist Limber Pine." I posted about it a few years ago. http://www.nativetreesociety.org/fieldt ... al_mon.htm 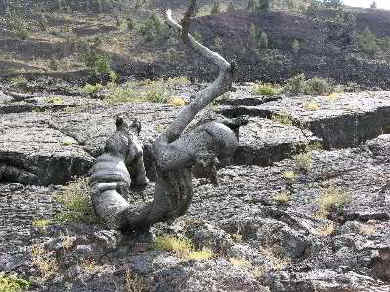 This is the triple twist Limber Pine. Impressive isn’t it? It is perhaps 8 inches in diameter and snakes along the ground for maybe 10 feet. It was dead appearing when I saw it. Dr. Christopher Earle, of Conifers.org http://www.conifers.org/pi/pin/flexilis.htm gives a nice description of the species overall and comments on this particular specimens: Maximum ages- Crossdated ages of 1,670 years from site ERE in New Mexico, collected by Swetnam and Harlan; and 1659 years for specimen KET3996 from Ketchum, Idaho collected by Schulman in 1956 (Brown 1996). Given the fact that crossdated tree ages are always underestimates because of the near-impossibility of sampling the tree's seedling growth years, either of these trees could have been the older, particularly since KET3996 was sampled about 30 years before the ERE tree. During a 1994 visit to Craters of the Moon National Monument, I believe I located KET3996; it was dead, and had been for many years.’

"I love science and it pains me to think that so many are terrified of the subject or feel that choosing science means you cannot also choose compassion, or the arts, or be awe by nature. Science is not meant to cure us of mystery, but to reinvent and revigorate it." by Robert M. Sapolsky
Top
Post Reply
7 posts • Page 1 of 1