Manatees, Springs. and some Florida trees

Manatees, Springs. and some Florida trees

Manatee Springs State Park
We camped several days in early March of 2017 at this park near Chiefland. This 2100 acre park borders the Suwannee River and features a first order spring that has a short channel feeding into the river.
The largest of nine species measured is listed below.
Loblolly Pine( Pinus taeda) 9.0' x 111.1'
Longleaf Pine (Pinus palustris) 6.3' x 92', 7.3' x 78.8"
Southern Magnolia (Magnolia grandiflora) 7.8' x 84.9'
Baldcypress (Taxodium dischtum) *** x 83.0', 13.5' x 82.0'
Pignut Hickory (Carya glabra) 5.3' x 80.3'
Eastern Redcedar (Juniperus virginiana)5.3' x 72.7'
Laurel Oak (Quercus laurifolia) 6.2' x 64.1'
Hophornbeam (Ostrya virginiana) 1.5' x 43.5', 1.9' x 35.4'
Sparkleberry (Vaccinium arborea) 2.0' x 24.5'
The Baldcypress and Laurel Oak was next to the spring the others on much drier site above the spring.
This area was described by William Bartram in 1774 after his wanderings in the southeast.
The Sparkleberry was a new one for me. Its shaggy red bark makes this tall blueberry easy to pick out in the woods.
For those that lived in Western Pennsylvanania in the 1970's and listened to Pittsburgh radio station KDKA during the morning drive time one became quite familiar with Farkleberry tarts as a fundrraiser for a childrens? hospital. Until now I thought it was a made up name but apparently Sparkleberry and Farkleberry are both common names for Vaccinium arborea.

Manatees in the Spring 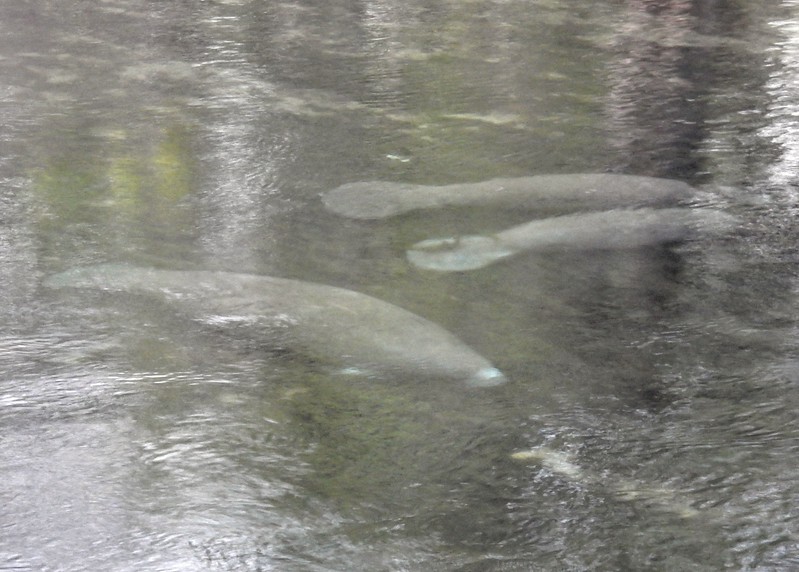 Manatees use this spring in the winter as a refuge from cold air temperatures. Swimming and snorkeling are allowed in
designated areas but one must keep at least fifty feet distance away.

Baldcypress in center of photo

Silver Springs Star Park.
This 5900 acre State Park near Ocala was acquired from private business interests between 1985 ans 2013.. This was Floridas first big tourist attraction and featured glass bottom boats tours on the Silver river and over several large springs. A short canoe trip was taken to enjoy the birdlife and aquatic life and North Americans only tribe of monkeys- Rhesus Macaques which were released in 1937 by a tour boat operator to enhance his "Jungle" boat tour.
Only one tree was measured near the entrance. but there was at least twenty more of similar size visible.
Baldcypress (Taxodium dischtum) 11.5' x 95.9'

Cedar Key
The small town (population 700) of Cedar Key is on one of the larger keys in this island complex on the Gulf of Mexico.
The largest of two species measured in a cemetery are listed below.
Sand Pine (Pinus clausa) 5.8' x 66.8', 7.2' x 48.6'
Sand Live Oak (Quercus geminata) 4.3' x 28.5'
Three of the Keys are designated federal Wilderness areas even though the total area is only listed as 891 acres.
The town is named after the eastern redcedar and the area was know for production of pencils.
8,000 acres of the are is in the Cedar Keys Historical and Archealogical District.
John Muir visited this area i 1867 while on his walk from Kentucky 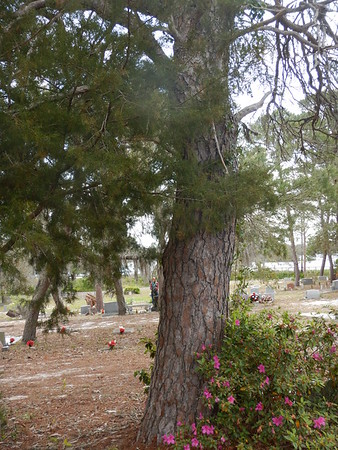 Click on image to see its original size
7.2' x 48.6'
This Sand Pine was on a sand hill in the cemetery and the Sand Live Oak on a old dune closer to the water.
Sand Pine looks very similar to Virginia Pine.

Click on image to see its original size
Top

Turner- Sand Live Oak get large, almost as large as the Live Oak. South Ms is loaded with Sparkleberry and I have seen some very large in De Soto NF. I have been meaning to go to the Cedar Key area just never made it. Nice Report Larry
Top

Is that the big cypress on the short spring run? I had my wife take of photo with me of a big cypress there a few years back when we were at the park on vacation.

Larry: Can i assume that the larger examples of the Sand Live Oaks are found farther away from the immediate coast? I saw many within 100 yards of the water but nothing much bigger then the ones i measured. Would this species also be called "Goat Oak?" You maeasured a Sparklebery in Alabama with a 60" circumference- WOW!
James:The Baldcypress pictured is one of two of about equal size along the Spring Run slightly downstream of the main spring. Kayaks are allowed there so it could have been the tree in your picture.

The picture below was taken just below the confluence of the Spring Run and the Suwanee River. Mostly Black Vultures. I counted over 400 before giving up because of their coming and going.

Along the Suwanee River

Click on image to see its original size
Top

The last time I was there a black vulture was on a low limb above the spring. He was pulling off those little fern-like epiphytes from the tree and dropping them into the clear spring run just to watch them float away.
Top

Turner- I have seen some 3-4' Dia. Sand Live Oaks say up to a mile inland just never really measured any of them. They tend to be much larger in the Florida area. I remember reading about their Champion somewhere around 5-6' Dia. Maybe I should measure some of the larger Sands in Ms. Larry
Top
Post Reply
6 posts • Page 1 of 1