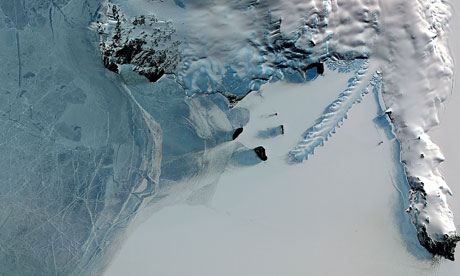 
Scientists have found life in an Antarctic lake that was sealed off from the outside world by a thick sheet of ice several thousands of years ago. Brine collected from boreholes drilled into Lake Vida contains scores of bacteria that clung on to life despite making their home in one of harshest environments on Earth. The lake lies in a barren region called the McMurdo Dry Valleys, in the east of the continent. The water in Lake Vida is acidic, starved of oxygen, and so salty that it remains liquid despite its temperature hovering around the -13C mark all year round. Researchers identified organisms from eight major groups of bacteria, among them common forms such as proteobacteria, firmicutes and bacteroidetes. Another group, the verrucomicrobia, are named for their wart-like bulges. continued...

Re: Antarctic lake find pushes known boundaries of what life

by Joe
I'm waiting for the day they find life on some other planet- hopefully I'll still be around for that.
Joe
All times are UTC-05:00
Page 1 of 1