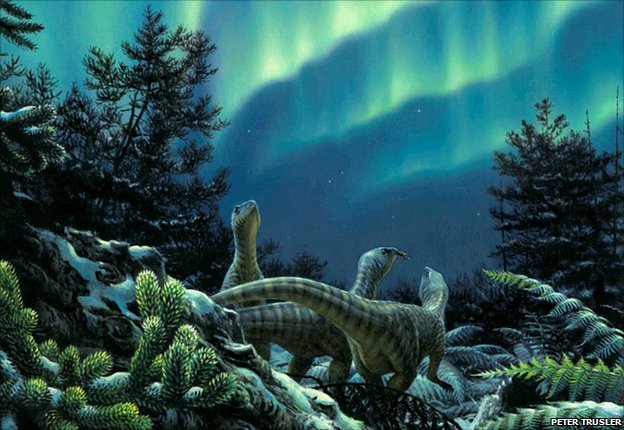 by jamesrobertsmith
I've always been so happy that I had parents who--while having had no formal education--were extremely well read. They would pile science books on me by the dozens so that I knew all about evolution and geology by the time I was six years old. My dad used to take me to the barber shop and impress the locals with my knowledge of prehistoric animals. My mom was telling me about plate tectonics before it was being taught in colleges--an effect of various professors stopping by to discuss politics with my dad who was an old style working class intellectual (and the owner of a popular Atlanta bookstore).

One of the books my mom and dad gave me to read when I was eight years old had a chapter on Antarctic fossils. So it seems as if I've always been aware that Antarctica was once much warmer and comfortable to life than it is now.

by James Parton
I remember seeing something on this on some show on dinosaurs a while back. It was quite fascinating how those dinos survived the dark antarctic night.

by Joe
100 million years ago, the Antartic wasn't at the south pole!

by jamesrobertsmith
Yep. It was already polar by the Cretaceous when it was relatively warm there. Ice and snow were there, but not common and likely fleeting.

When I was a kid, one of the professors from GA Tech who would visit the house from time to time explained the movements of the continents to me. Later, my mom explained it in even simpler terms for my eight-year-old ears. I don't recall hearing the term "plate tectonics", but when I finally began to hear of it in my later teens I already knew what it was. (The professor may have been Bud Foote who was actually an English professor--but it may have been somebody from the science department. Foote was the guy who visited my dad most often, though.) In the 1960s it was largely discounted and thought to be a fantasy by many geologists.

I still don't think Antartica was in its present postion 100 M years ago- it may have been moving in that direction, but I doubt any continent fails to move for long, other than Africa which I think is believe to have moved very little.
Joe

by edfrank
How Antarctica Got So Cold
Jun 27, 2011 3:02 PM ET
By Charles Q. Choi, OurAmazingPlanet Contributor