April 21st, 2018 found me admiring an amazing Beech nestled on a hillside above the Bluestone Lake (New River) in Summers County near Bellepoint, WV. 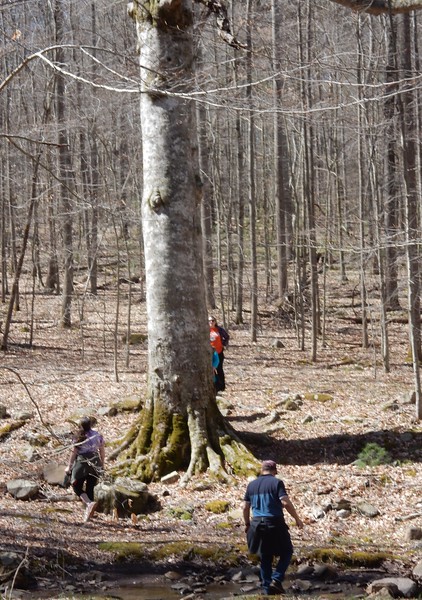 The tree is on property of the US Corps of Engineers leased to Bluestone Camp and Retreat which used to be a summer camp for church folks - Presbyterians i believe.
Elevation 1600' with a northwestern exposure
The tree does not set any records for height or circumference for a West Virginia Beech but the crown spread is off the charts.
The crown spread is an average of the two-axis method with the maximum at 147'.
The crown was tangled up with some Red Maples (in flower) making height and crown spread measurements difficult.
Also increasing the difficulty were a number of "helpers" that were more of a distraction while trying to study the crown structure.
Both of those measurements should be considered Not Less than (NLT).
Top

Re: A nice Beech

Turner- Wow!! That is one heck of a Beech tree! Much taller than any I've measured. This is the largest and tallest I've measured in Ms.

Re: A nice Beech

That spread really is exceptional. While the trunk looks very much forest-grown, seeing how young the majority of the surrounding trees look, I imagine this tree is a remnant that was left by the most recent loggers and took advantage of the extra growing space.
https://flic.kr/s/aHskRDyuEH
http://www.inaturalist.org/people/er1kksen
Top
Post Reply
3 posts • Page 1 of 1