NTS:
Sixteen of us put in on the Green River at the Gates of Lodore Campground in Colorado on 7/23/2015 and spent six days on the river with a take out at Split Mountain in Utah. This section of Green River requires a permit to run which is obtained through a lottery system. We traversed 45 river miles with an elevation drop of 620 feet. Rapids are class 2-3 at low/moderate flows of 1000-3000 cfs that we encountered. It runs through Dinosaur National Monument and passes the confluence of the Yampa River at Echo Park. Scenery is a series of beautiful canyons ranging from 2-3,000 feet deep. Going downstream the canyons are Canyon of Lodore- 16 miles, Whirlpool Canyon- 9 miles, Split mountain Canyon- 7 miles. The Powell expedition of 1871 named the Canyon of Ladore after a familiar poem of the time. Likewise a rapid named Disaster Falls is still used to denote a rapid in which his party had a boat destroyed.
I measured a few trees at most of the stops we made along the river.

It is somewhat unusual to get ten species in a western area to get a Rucker -10 height index. RH-10 = 33.5' which sets a record for me as shortest index i have encountered. But after all it is part of the Great Basin Desert and only receives 10-12 inches of rain a year.
The most common tree encountered was the Arizona Boxelder. If one would measure farther from the river then the Utah Juniper and two -needle Pinyon Pine would probably be the most common.
While companions were counting Bighorn sheep I was enjoying a tree I had never seen previously. That was the Singleleaf Ash. A small grove of three mature trees (all with substantial lean) and many sprouts were near the Wild Mountain camp.

A coup;e of pictures of these beauties found along the river.

Amy in a Utah Juniper 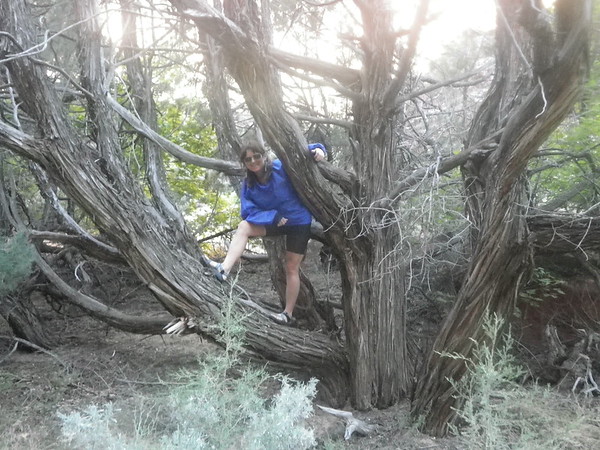 Bridget in front of a Utah Juniper.

All trees measured were entered in the Trees Database in the appropriate State.
Top

Thanks for recognizing the single-leaf ash, that is a new species to me. I know EAB has been confirmed in a Colorado county, probably from transported wood. Hopefully the remoteness and lack of host density will keep this species from being attacked.
Top
Post Reply
2 posts • Page 1 of 1